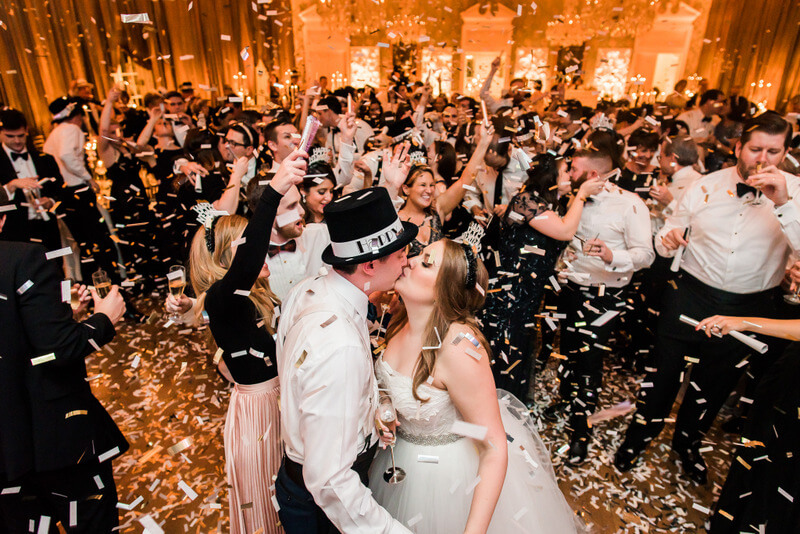 What better way is there to bring in the new year, 2020 other than to have the wedding of your dreams?  Dan and Allaire, soon to be Mr. and Mrs. Rutherford knew this was the perfect plan!  The couple chose to go all out with a wedding celebration that no one could ever forget!   They chose the wedding venue, The Liberty House on Audrey Zapp Road in Jersey City, New Jersey.   This two-story event space allowed the couple to have their ceremony, cocktails and reception all in one venue.  The bride and groom chose the Around Town Band from Around Town Entertainment, a New York wedding entertainment company to perform the music for all the above.   The wedding ceremony was held upstairs.  The bride chose “Your Song” by Elton John as the bridal party song and “She’s Got A Way” Billy Joel for her processional song.  The crowd cheered at the conclusion of the ceremony as the piano sounded off  “You’re My Best Friend” by Queen.

The guests were invited to enjoy cocktails downstairs.  The jazz trio from Around Town Entertainment played a cool mix of the couple’s favorite songs to entertain the guests as they mingled and geared up for the exciting dance party to come.As the guests were escorted to dinner, the full band nine-piece band welcomed the guests in with some exciting music.  The guests were immediately drawn to the dance floor as they waited in anticipation for the newlyweds to be announced into the room.    The NY wedding band played some classic wedding songs that were chosen by the couple  The oh so popular song “Can’t Get Enough Of Your Love” by Barry White was the celebration song that the band played as the bridal party and bride and groom were introduced into the main reception.  The sultry and soulful song “That’s How Strong My Love Is” by Otis Redding was the official first dance wedding song for the bride and groom.   It was specifically because of this song and the classic horns that were so prevalent in the original version of the song, that the couple chose to include the horn section as part of their live wedding band.    The song and the horns created a throw back feel reminiscent of the old New York.  And how perfect!  The open windows of this beautiful wedding space looks directly out at the New York Skyline.The bride and groom chose to each take a special dance to honor their parents.  The bride and her father danced to Stevie Wonder’s “You Are The Sunshine Of My Life.”  Everyone could clearly see the bride truly was the sunshine of her daddy’s world, so it was the perfect song.  The groom chose the classic standard  “Moon River” as the song for the dance with his mom.

The band played all the favorites the couple chose as their NY wedding music selections.   “Rosalita” by Bruce Springsteen and “1999” by Prince, and “Build Me Up Buttercup” by the Foundations were just a few of the song requests that the band played.  The band also played “Don’t Stop Believin” by Journey as the very last song of the night.  The bride and groom chose this as their perfect wedding night anthem song.  The crowd danced the entire night, celebrating the couple and celebrating the bringing in of a new year.  2020 was off to a brilliant start.

Around Town Entertainment was thrilled to be part of this amazing celebration.