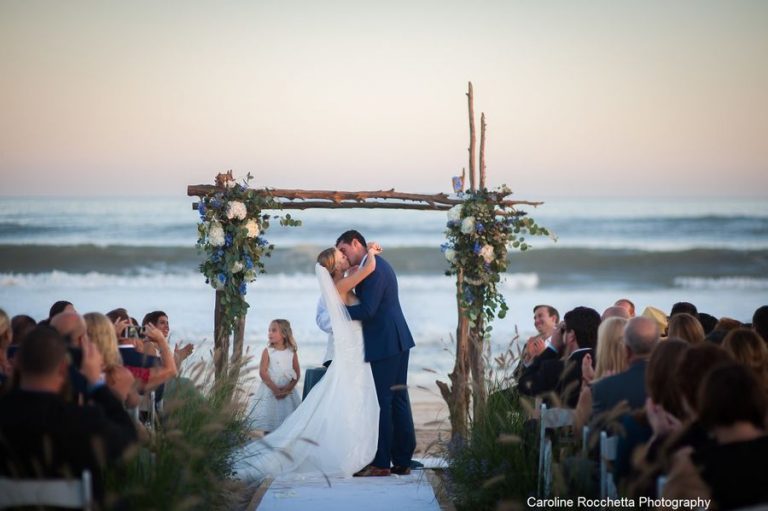 When fate breaks your coffee machine

Fittingly, Lindsey and Brendan met in a classic New York setting — on the 31st floor of the old Time & Life building at 1271 Sixth Avenue. Brendan had recently started a new job there, working as an editor for GOLF Magazine. It was only a few weeks into the job that he first noticed Lindsey, who worked on the 32nd floor as an account manager for Sports Illustrated. It was love at first sight. He was so struck by the aura of Lindsey’s beauty that he couldn’t help but wonder ‘what would it take to get someone THAT far out of my league to talk to me?’ From there, fate took over.

Lindsey and Brendan were soon introduced by Sean Zak, a colleague (and now a close mutual friend) with who he shared a cubicle with at the time. Every few days, Lindsey would show up at the cubicle Sean and Brendan shared, empty Clemson coffee mug in hand, claiming the coffee machine on her floor was broken. Contrary to popular belief, the coffee machine on Lindsay’s floor really did break. Again, we did say fate took over. A half-hour later, they’d be deep in conversation (sorry, Sean, for the endless distractions). Needless to say, Brendan made sure the coffee machine on Lindsey’s floor never got fixed and Lindsay had never been so grateful for a broken appliance in her entire life.

From there, the two began what became a deep and meaningful friendship (brimming with mutual attraction, but also mitigated by apprehension because they were colleagues). Lindsay looked forward to work every day because she knew Brendan would be there. They quickly got to know each other through work happy hours, G chat conversations, and paper cups of after-hours wine at one of our desks. All they had in common quickly became apparent: a focus on God & family, a love for sports (“fan” doesn’t come close to describing Lindsey’s relationship with Clemson football), and fascination with New York City — not to mention a unique appreciation for the brands they were lucky enough to represent, Sports Illustrated & GOLF.

As their professional roles flourished and intertwined, the duo realized that their skills were almost perfectly complementary. This gave them the opportunity to make up plenty of excuses for meetings, check-ins, regroups, catch-ups…you name it. Work conversations turned into life conversations until Brendan got up the nerve to ask Lindsay on a proper date, and after a few of those, they figured out that this was the real deal.

In 2017, they both left Time Inc. for greener pastures — Brendan to Inc. Magazine and Lindsey to a boutique marketing agency with luxury real estate clients. That departure didn’t last long; after lots of deliberation and prayer, Lindsey and Brendan both returned to GOLF in summer 2018 (now under new ownership) where they have remained to this day, working alongside one another on LOTS of projects. For most couples, working that closely is simply not possible. But for Lindsey and Brendan? Nothing was more natural — and they don’t ever take that blessing for granted.

Brendan and Lindsay were engaged on May 11, 2019, at what has become one of our favorite places on earth — Sea Island. From Sandy Hook, NJ to Watch Hill, RI, Lindsey and Brendan are never far from a beach, which is why they chose to celebrate their wedding day at the casually gorgeous Bridgehampton Tennis & Surf Club! A beautiful venue for a beautiful couple!

The bridal party walked down the aisle to the ever so classic, Pachelbel’s Canon before the big moment! Lindsay started down the aisle looking at all the people who came to celebrate and support her and Brendan’s marriage, while the A-List Band’s guitarist accompanied a vocalist singing “Oceans” by Hillsong. After the couple said their “I do’s” they skipped down the aisle to Ray LaMontagne’s “You Are the Best Thing” in cinematic-adjacent style! It was time to party!

The Around Town Entertainment’s jazz trio welcomed the guests for the cocktail hour on the upper back deck of the Bridgehampton Tennis and Surf Club! The relaxing jazz, fine drinks, and beautiful view of the ocean were incomparable!

Then the room shifted into a dance floor, where guests danced the night away to the A-List Band with the view of the ocean as the night’s backdrop! As a nod to their NYC love story, Brendan and Lindsay were introduced as husband and wife to Billy Joel’s “Uptown Girl,” and the party kicked off!

We LOVED all the beach-life songs that Brendan and Lindsay picked for the A-List Band to play for some of their special moments! For instance, the two requested “Cake by the Ocean” as their cake-cutting song!

Thanks, Brendan and Lindsay for having the A-List band underscore your beautiful beach-themed wedding! Congratulations!