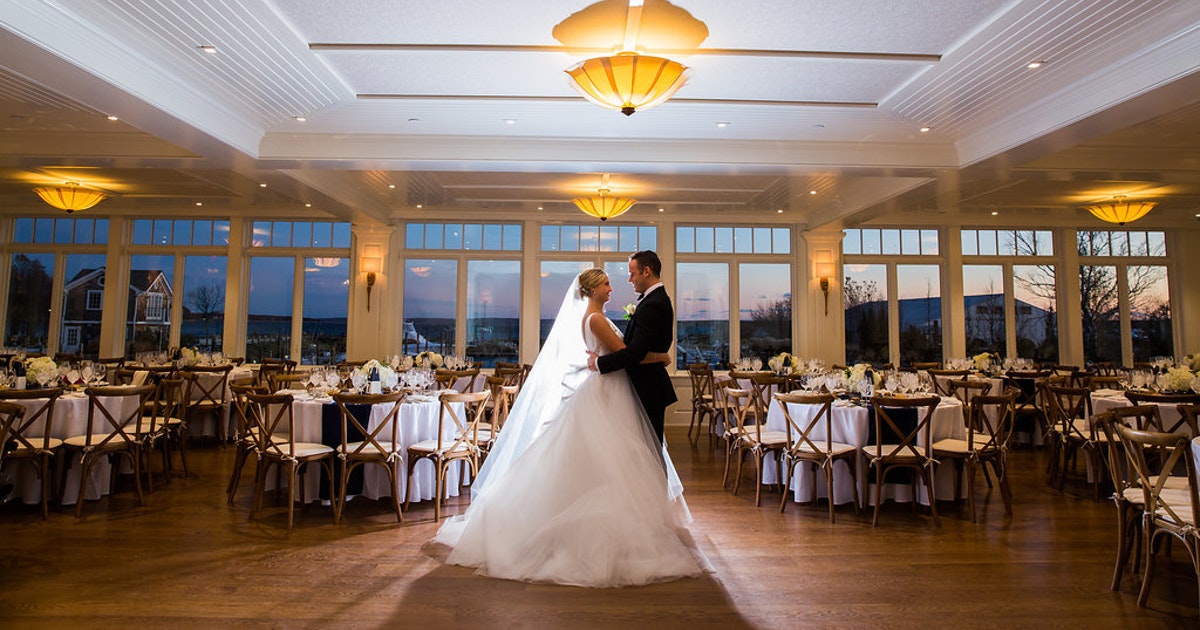 Caroline and Alex met in the fall of 2010 as juniors at Bates College.  They spent the next semester as pen pals while Alex studied abroad and then started dating that summer.  8 years later, although the restaurant where they had their first date closed several years ago, they decided to finally get married on August 10, 2019. What a story!

Together they have endured Maine winters, 3 years of long-distance dating and New York City’s “New York Cityness”, and after surviving all of that, they believe they are fully prepared to embrace whatever adventures await in their future life as they get married and build a home — together.

Nestled in the North Fork’s Peconic Bay and Long Island wine country, the Peconic Bay Yacht Club is a very beautiful facility for wedding celebrations! The property has a waterfront lawn, a private marina, an exquisite indoor ballroom, lounge, private tasting room, and panoramic view from the terrace!

A pianist from Around Town Entertainment set the mood as the bride and groom walked out officially as a married couple to songs from The Beatles and Queen!  It felt like a romantic affair!  The manicured grounds and great lawn overlooking the Peconic Bay were perfect for this picturesque ceremony.

After that, guests headed into The Ballroom for dinner and dancing. Around Town Band from Around Town Entertainment played cover songs from Arcade Fire, Beach Boys, Bob Dylan, and much more to ring in the wedding celebration. While guests were enjoying the time, they also had a chance to overlook the panoramic water views. The scene was delightfully special!

The food was delicious and there’s so much of it! From cocktail hour and the amazing raw bar to the butler-passed dessert parade, everything was flavorful and well-executed. We overhead guests mentioning that it is the best food they’ve ever had at a wedding. Couldn’t agree more!

When dinner and dessert was finished, the party continued with Around Town Band performing an intimate showcase for the guests. From Bruno Mars to Pearl Jam, the wedding band played hits that kept the floor pumping with sweat and energy. What a night!

The wedding at Peconic Bay Yacht Club was by far one of the most magical evenings of our lives!!! From the service, coordination, organization, set-up, menu, cuisine, drinks, and everything else, we were impressed by the planning leading up to and execution of their wedding day. Well done!

Read about our last wedding!

The Castle at Oyster Bay