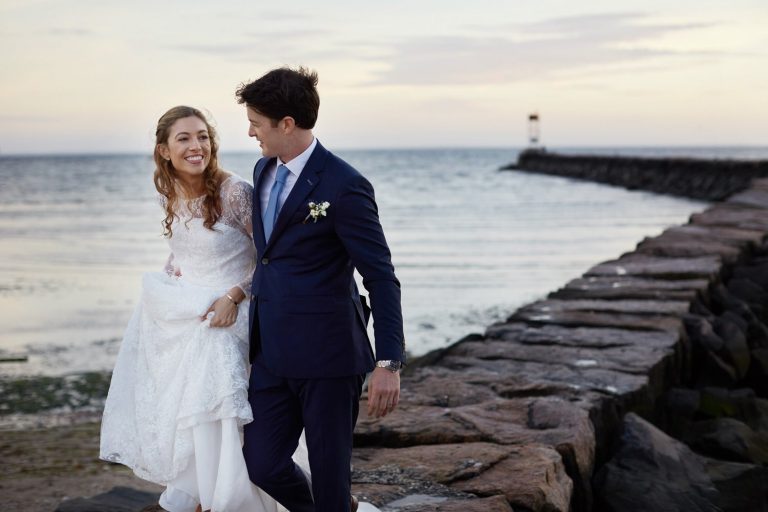 Emily and Bryan both grew up in the town of Fairfield, CT, but went to different schools growing up and did not know each other. Their paths finally crossed at Bryan’s brother, Jeff, and Emily’s friend, Lauren’s, engagement party at Bryan’s family’s house in October 2016. When they were introduced at the party, they both sensed a little spark, but nothing came of it–yet! They didn’t see each other again until Lauren & Jeff’s wedding in June 2017. That night they hit it off, barely leaving each other’s sides all night, and have been inseparable ever since!

Bryan proposed on a trip to Block Island in July 2020. Block Island is a special place to Emily and Bryan because it’s where they took their first trip together in the summer of 2017. On the first night there, they went for a walk down the Mohegan Bluffs before dinner and Bryan popped the question right there on the beach. It was the perfect proposal!

Emily and Bryan said “I do” at the First Congregational Church in their hometown of Fairfield, CT. After a beautiful, heartfelt ceremony, the happy couple and their guests headed over to the Country Club of Fairfield for the party! The festivities began with a cocktail hour underscored by Around Town Entertainment’s Jazz Trio. As guests enjoyed drinks and the beautiful waterfront view, they tapped their toes to all their favorite Jazz standards.

When the reception began, everyone applauded as Emily and Bryan entered to Bruno Mars’ “24K Magic,” played by Around Town’s Authority Band, their friends and family cheered as Bryan and Emily showed off some fun dance moves. Once the couple had received their warm welcome, it was time for their first dance. The couple had chosen “Sweet Thing” by Van Morrison for the occasion, as they danced it was very clear that they have some undeniable chemistry. Bryan took a moment to twirl Emily as they danced, which drew some “aw’s” from the crowd! The slow dances continued with Emily and her father sharing a dance to Frank Sinatra’s “The Way You Look Tonight.” As Emily and her father danced to the beat of the music, you could tell from the look on her father’s face that he was truly happy for his daughter and this next step she was taking in her life. Next Bryan and his mother took to the dance floor to dance to Celine Dion’s “Because You Loved Me,” charming the crowd with their sweet song choice.

By the time the slow dances were over, everyone else was eager to get on their feet! The Authority Band kicked things off with “September” by Earth, Wind, and Fire, to celebrate Emily and Bryan’s September wedding. As the night went on, the band played everyone’s favorite songs, from pop favorites like Beyonce’s “Crazy In Love” and “Shut Up and Dance” by Walk the Moon, to throwback hits like Whitney Houston’s “I Wanna Dance With Somebody” and “Signed, Sealed, Delivered” by Stevie Wonder. The happy couple danced the night away with their friends and family, it was definitely a night to remember!

Thanks, Emily and Bryan for having the Authority Band rock your night!