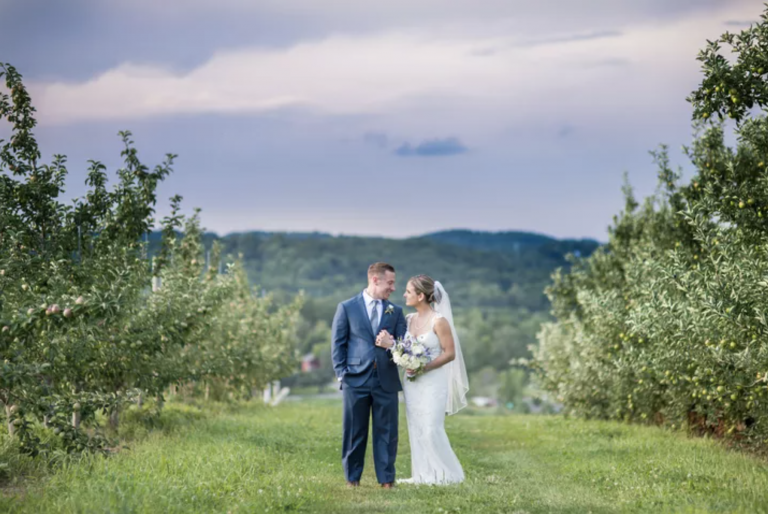 Janelle and Daniel met in July 2015 and it was love at first swipe! After only a few messages they were already talking like they’d known each other for years. It wasn’t long until they knew that they needed to meet. Their first date was at a beautiful rooftop restaurant in Stamford, where they watched the sunset while having a romantic candle-lit dinner. They spent hours getting to know each other better, and realizing all they had in common, including the fact that they are both dog lovers! After that wonderful night, they have developed an inseparable bond and supported each other through many ups and downs.

The couple got engaged on their first pandemic getaway to the town of Okemo Mountain in Vermont. Daniel surprised Janelle with dinner at a romantic local restaurant. When he popped the question over dessert, Janelle joyfully said “yes!”

Fast forward to the big day! Janelle and Daniel said “I do” in a beautiful ceremony at St. Sebastian Catholic Church in Middletown, CT. After the wonderful ceremony, the newlyweds and their guests then headed over to the Lyman Orchards Golf Club to get the party started! The guests were greeted with cocktails on the Club’s grounds, accompanied by Around Town Entertainment’s Jazz trio, featuring a pianist, guitarist, and a bass player. As they enjoyed their drinks and appetizers, guests tapped their toes to all their favorite Jazz standards!

It was then time for the reception! Guests entered the beautiful reception tent, where Around Town’s Artists Band was already rocking out! The bridal party entered onto the dance floor accompanied by the artists Band playing “Can’t Stop the Feeling” by Justin Timberlake, the upbeat tune gave every member of the party a moment to show off their unique dance moves. Everyone erupted into applause as Janelle and Daniel danced into the tent to Calvin Harris’s “Feel So Close.” The band then slowed things down for Janelle and Daniel’s first dance, playing a slow and romantic rendition of Vance Joy’s “Missing Piece.” From the way they looked into each other’s eyes as they danced, anyone could see that the happy couple are undeniably in love!

Members of the wedding party then gave toasts to the happy couple, underscored by the Artists Band playing a beautiful instrumental version of Elton John’s “Your Song.” The nostalgic tune was the perfect accompaniment for the funny stories and heartfelt well-wishes that filled the speeches given by Daniel and Janelle’s closest friends! The event stayed on that sentimental note going into the father/daughter dance. Janelle and her father shared a hug as they began their slow dance to “My Wish” by Rascal Flatts. Daniel and his mom charmed the crowd as they swayed along to “Do You Realize?” by The Flaming Lips, a favorite of Daniel’s.

Janelle and Daniel cut their beautiful wedding cake as the Artists Band played “Sugar” by Maroon 5, the perfect song choice to accompany such a delicious sugary treat! The band continued to play everyone’s favorite songs as everyone grooving on the dance floor well into the night!

Thanks, Janelle and Daniel for having the Artists Band play all your favorites for your big day!