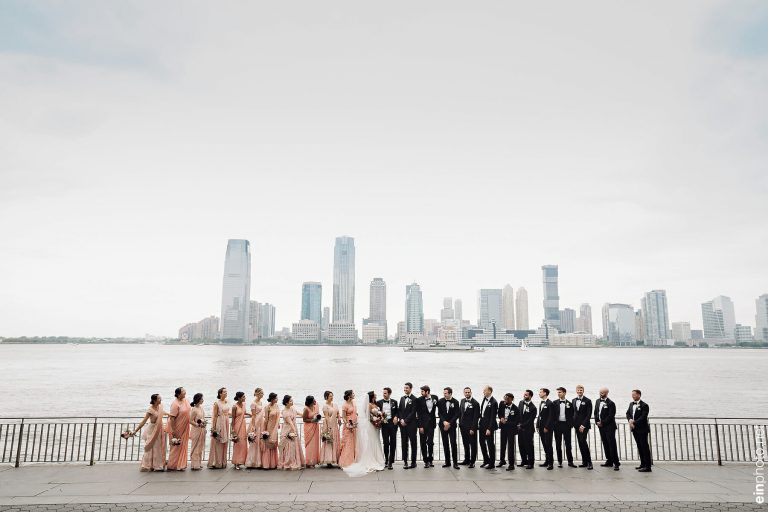 Love On The Pier

Love was truly in the air this weekend, because Gabriel and Ana tied the knot! After the beautiful ceremony, with the happy couple officially wed, the reception was set to begin. The sun fell over the beautiful Pier Sixty in downtown New York City, with the swashes of golds, oranges, and pinks glittering over the gorgeous rippling water–and that meant that it was time to party! The night started off strong with lots of fun, laughter, drinks, and food, and by the time that the entrance song began, everyone was ready to dance! The bride and groom entrance song, “I Want You Back” by the Jackson 5, really got everyone to their feet, and inspired them to cut a rug! Once Gabriel and Ana made to it to the floor, everyone was moving, grooving, and having a great time. But that was only the beginning of the night!

After the dance floor was cleared, the night pivoted to one of the most tug-at-the-heartstrings moments of the reception: the first dance! Gabriel and Ana chose “Let’s Stay Together” by Al Green, and not a single eye was dry in the house. With such a moving moment in the rearview, the entire party took to the floor to partake in the Hora! The roof, and the chairs, were certainly raised, as everyone dance and sang joyfully. It was then that the party heard a blessing by Eric, the stepfather of the groom, as well as toasts Roy, Elizabeth, Carl, Martha, Harriet, Ezra, and Ellie, all recalling wonderful memories that truly tied a bow on the night. But by the time the final joke was cracked, it was time for more dancing!

Ana and Roy took a spin around the floor during their Father/Daughter dance to “What a Wonderful World” by Louis Armstrong. At the point that everyone had wiped away their tears, it was already time to prepare the handkerchiefs once again, as Gabriel and Martha danced to “I’ll Stand By You” by the Pretenders for their Mother/Son dance. By the time the final step was taken, it was already time to cut the cake, and everyone made their way over to grab a slice! After that, the night was spent dancing and laughing the hours away, with songs such as “You Make My Dreams Come True” by Hall and Oates, “If I Ain’t Got You” by Alicia Keys, and “Hey Ya” by Outkast setting the tone for the rest of the evening.

After a perfect day of dancing, laughing, and singing the night away, the attendees of the Stine and Sabo wedding left with memories they would never forget–and with a beautiful city skyline view outside their window all night, who would want to?!