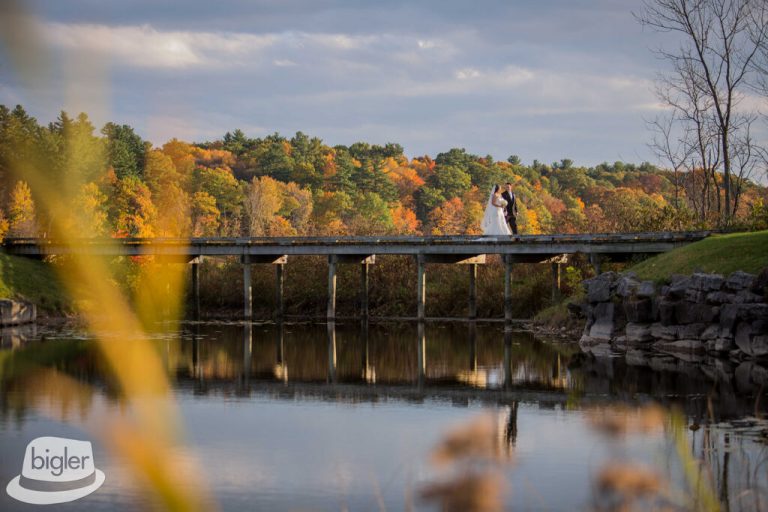 Over the rolling green hills of Saratoga National Golf Course, there were caddies carrying golf clubs, carts scooting fast towards their next destination, and lots of long hits, with professional hopefuls crossing their fingers for those low scores. But more importantly, Michele and Tommy got married!

With fair weather and a gentle dose of sun that kept the vibe light and breezy, the bride’s song, “Here Comes the Sun”, truly encompassed the vibe of the beautiful day! It was a gorgeous ceremony, with plenty of lovely music (including “A Thousand Years” and “From the Ground Up”) and immaculate views, and before long, it was time for the party to move on to the cocktail hour! There, they were serenaded by the Around Town jazz trio, on the second floor of the clubhouse. With lots of drinks and mingling done, the party was ready to move on to the next step: the reception!

The reception started off with a bang, as the Bridal party entered to “Baby” by Justin Bieber, sang wonderfully by Katrina, before Michele and Tommy entered to “Can’t Stop the Feelin‘” by Justin Timberlake! By the time that the room rippled from the burst of excitement, it was time to steel themselves; the tearjerkers waited, just over the horizon. And they didn’t start gently; the first dance, “I Choose You” by Sara Bareilles, guaranteed that there wasn’t a dry eye in the house! But by the time it was over, it was ready for another beautiful choice: “My Girl” by the Temptations, for Michele and Jim. The Father/Daughter dance, skillfully crooned by GTO, was the heart-warmer needed to prepare the party for another tug at the heartstrings, as “A Song For Mama” played under Tommy and Tee’s heartfelt Mother/Son dance.

After plenty of precious and sweet moments, the party was ready to live up to its title… and party! The slow dances were a thing of the past, as the band geared up some of its greatest hits–and some of the Bride and Groom’s requests! From Ed Sheeran to Dua Lipa, the band played the night away, but the biggest winners were very clear. Adam’s rendition of “High Hopes” by Panic! At the Disco brought the house down, but not before Katrina could kill it with “Bang Bang” by Jessie J. The best and brightest, however, had to be the moment when both Adam and Katrina joined forces for “Stay” by Kid Laroi and Justin Bieber. By the time that the night was through, the party had gotten good use out of their dancing shoes; and they had certainly earned a good night’s sleep!

Love On The Pier