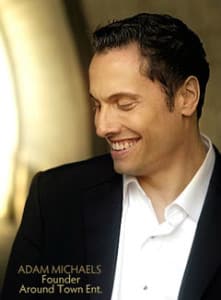 Busy May Wedding Weekend For Around Town Band

While June is traditionally the “bridal month,” many couples are marrying in May to avoid the seasonal rush and still enjoy the beautiful weather that abounds this time of year.  Around Town Entertainment has been busy with weddings through the beginning of May, each of which represented a different style and all of which were absolutely stunning!

The month of May kicked off with the Klein/Kelly wedding in Jersey City at the Hyatt Regency.  The bridal couple chose “Blurred Lines” by Robin Thicke for their party’s entrance song, with “I Gotta Feelin” by the Black Eyed Peas for the couple’s entrance.  Despite the uptown beat of their entrance, the new couple’s first dance was performed to “Can’t Help Falling in Love,” a beautiful and traditional slow ballad originally performed by Elvis Presley.  Father and daughter danced to “Somewhere Over the Rainbow” while mother and son danced to “When I Need You.”  The entire party grooved through the evening to great music including “Everything in Between,” a song especially written by the bride for the groom!  Other great musical selections included “Shut Up and Dance” by Walk the Moon, “The Club Can’t Even Handle Me Right Now,” by Flo Rida, and “Fly Me To the Moon” by Frank Sinatra.  Everyone had a great time and danced the night away to fantastic music!

The After Party Band stepped up for the Park/Rabinovici Wedding held at the Water’s Edge Resort and Spa in Westbrook Connecticut, bringing
an incredible fusion of jazz and other elements to this sophisticated gathering.  The bridal party entered to “Raise Your Glass” by Pink, while the bride and groom entered to “Fireworks” by Katy Perry.  Their first dance was performed to “Thinking Out Loud” by Ed Sheeran, with the parents dancing to “Let it Be Me” by Ray La Montagne.  The Hora was performed to “Simon Tov,” “Havenu Shalom” and “Hava Negilah,” and the couple performed the cake cutting to “By Your Side” by Sade.  The wedding guests all agreed that the music beautifully reflected the eclectic and polished class of this event!

The Royalton at Roslyn Country Club was the setting for the beautiful Mauceri/MacFarlane wedding on May 3,
featuring an elegant garden ceremony with “Caledonia,” an Irish-inspired Dougie MacLean number and a bridal processional of “Canon in D” by Pachelbel.  After the ceremony, the party recessed to “You Are The Best Thing” by Ray La Montagne to a cocktail reception followed by the dinner/dance.  The bride and groom entered to “Best Day of My Life” by American Authors, with their first dance to “And I Love Her” by Passenger performed in both acoustic and with vocals.  The father/daughter dance was performed to “I Loved Her First” by Heartland, while mother and son danced to “Have I Told You Lately” by Rod Stewart.  During the cake cutting, the band played Billy Joel’s “Just The Way You Are.”  Additional songs included a vibrant mix with “Moralito” by Carlos Vives, “Vivo Per Lei” by Andrea Bocelli, “Don’t Stop The Party” by Pitbull, “Uptown Funk” and “Conti Partiro” sung in Italian.

forward to more May

May Continues for Around Town Entertainment With Incredible Wedding Music