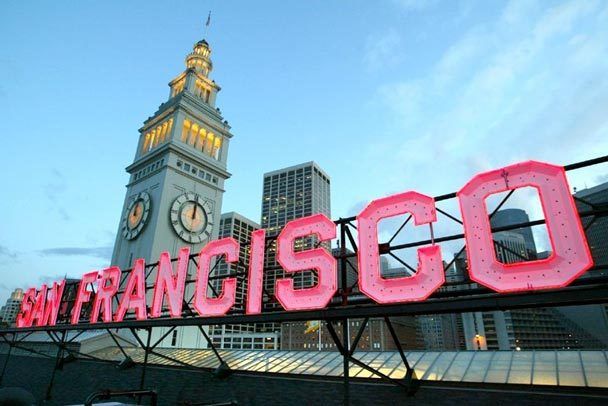 It was freshman year at college in New York when Dana first met Leigh. They became friends and it turned into something more several years after the two had graduated. At that time, Dana was working in retail merchandising in Manhattan and Leigh was employed at a tech company in San Jose, California. Though miles separated them, their relationship flourished. After two years and 100+ flights, Dana knew they’d be together forever when Leigh moved north to live in Brooklyn.

Though the subject of marriage didn’t come up in conversation, the 10 weddings they attended in one calendar year certainly brought it to mind. Dana felt the time was right to propose. But it wouldn’t be just a simple kneel-and-present-the-ring kind of situation.

The setting was at the San Francisco Ferry Building, one of Leigh’s favorite spots in the city and one of the most coveted tourist destinations in the world. Dana had to stage 8 “stations” across the building, each with a person from Leigh’s life there to guide her through to the next one. Right when she was dropped off at the Ferry Building, she was greeted with an embrace from one of her college roommates. From there, she was taken to other stations, where she was met by other friends, who either performed a flash-mob line-dance, painted a portrait for her, strummed a song on a guitar, posed for a picture, or recapped a poignant memory from their friendship.

Close to the final station, her mom, dad, brothers, and sister-in-law, who had also flown in for this, greeted her. That’s when she broke down. The final station was theoretically set up to be another moment she would never forget: getting proposed to!

They were married at the Madison Hotel in Morristown, N.J. The Madison Hotel is gorgeous.. think vintage victorian. So we were beyond happy when Dana and Leigh invited Around Town Entertainment to play on their special day!

The ceremony took place at The Madison Hotel’s beautiful Conservatory.  The planters and decor in the Conservatory set a lovely atmosphere for a wedding in any season. From the walk down the aisle to the exchange of vows, Around Town Entertainment created a musical journey that expressed Dana and Leigh’s individuality and transformed the exchange of vows into a moment that they will treasure forever. The pianist from Around Town Entertainment was also a stunning addition as he played a wonderful selection of emotional instrumentals perfect for the occasion all the way until the end of the ceremony!

The reception was held in the magnificent Glynallynn Ballroom. Around Town Entertainment’s Around Town Band was the main act for the evening. The stage was set inside the 4,000-square-foot Glynallynn Ballroom surrounded by magnificent chandeliers and warm ambient lighting. The wedding band set an intimate and stylish tone from the start with a cover of Bruno Mars “Treasure” as the bride and groom made their grand entrance.  Immediately everyone loved the music. Guests raved about the wedding band all night as the wedding band played a high-energy playlist for the rest of the night which included artists like Maroon 5, Ed Sheeran, and Fall Out Boy! What an absolutely exquisite wedding!

Thank you so much to Dana and Leigh! It was a truly amazing day!

Watch video footage of our bands at www.aroundtownent.com