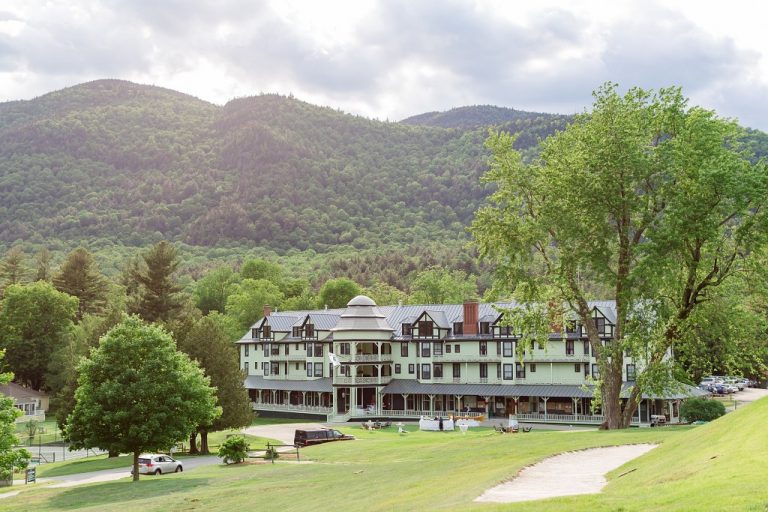 Get someone who looks at you like David looks at pizza

David and Maria met during their freshman year at Cornell at a face-painting booth. He had a unicorn on his forehead, she had a full zebra face. For 6 months afterward, David pursued an oblivious Maria, who was convinced they were just really great friends. Inseparable, they watched Rocket Power and devoured pizzas together, and finally, after some flirtatious banter and a couple of beers, she agreed to go out with him in November of 2010. Over the years, they’ve explored Ithaca, Las Vegas, Burlington, New York City, and Oregon – both together and apart. They’ve shared a mutual love of soup dumplings, ramen, pizza, well…any food really! They also share a love of the mountains! Maria jets off with her backpack every summer, and David gets giddy every ski season.

Maria and David celebrated their big day at the Ausable Club in Keene Valley, NY. The festivities were kicked off with a beautiful ceremony that was accompanied by Around Town Entertainment’s pianist! Maria looked breathtaking as she walked down the aisle to Tom Petty’s “Wildflowers,” a view of the beautiful Adirondack Mountains behind her. After Maria and David said their “I Do’s,” their friends and family applauded as the happy couple gleefully walked back up the aisle as the pianist played a beautiful rendition of “For Once in My Life” by Stevie Wonder.

Ready to celebrate such a momentous occasion, everyone walked over to the club’s circle lawn for cocktail hour! While enjoying drinks and appetizers, guests were tapping their toes as Around Town Entertainment’s Jazz Trio played everyone’s favorite jazz standards to set the mood! The spectacular views of the mountains, the drinks, the beautiful music! It was truly amazing to experience and the party hadn’t even started!

When it came time for the reception, everyone was greeted in the reception tent by Around Town’s Authority Band! The band rocked and everyone felt the energy of the dancing that was in store! Maria and David shared their first dance to “Coming Home” by Leon Bridges where the newlyweds got to show off their excellent dance moves and undeniable chemistry. Maria and her father shared a lovely moment during the father/daughter dance, as the Authority Band played Sam Cooke’s “Nothing Can Change This Love,” it was clear that Maria’s father was proud of the woman that she had become. David and his mom charmed everyone as they danced to “The Wonder of You” by The Villagers. Of COURSE, Maria and David picked a delicious many because, well, what better way to celebrate their love than with their love of food! Only the best for their special day!

After these sentimental and memorable dances, the guests rushed to the dance floor as the Hora began to play, everyone sang along as they danced! When it came time for David and Maria to cut their wedding cake, the Authority Band played “When You’re Smiling,” which put a smile on everyone’s faces as the happy couple took the first slice from their beautifully decorated wedding cake. Maria, David, and their guests danced the night away as the Authority Band played pop and rock hits from the couple’s favorite artists including The Strokes and Harry Styles!

Thanks, Maria and David for having the Authority Band for your wedding celebration!