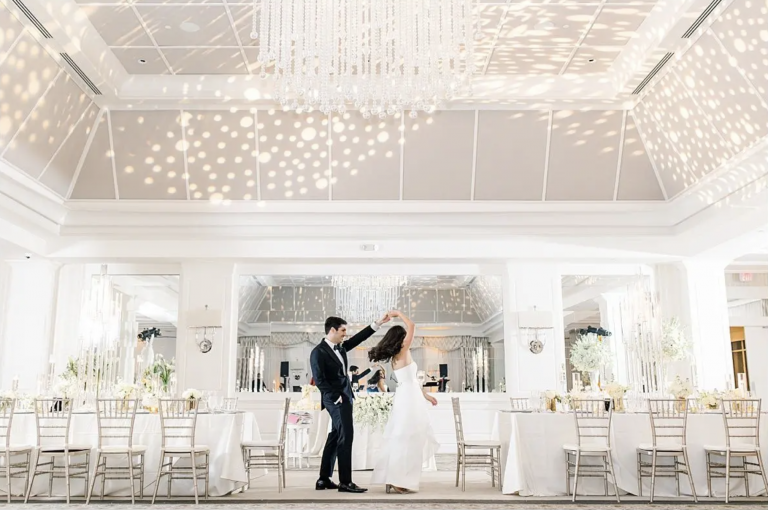 She won the dog’s heart, and then his

Andrew and Allie met while living in Astoria, NY. In fact, their first date was at a bar called Sweet Afton! They talked for hours and hours and hours…until the bar kicked them out! Allie met Ares (Andrew’s husky) weeks later and that sealed the deal. Ares fell in love… and Andrew did too! 😉 Andrew moved to New Jersey a couple of months later and Allie followed a few years after!

Andrew and Allie traveled to Fort Lauderdale, Florida for a much-needed vacation. Andrew convinced Allie to wake up to watch the sunrise on day 3 of the trip. We have always talked about watching the sunrise on previous vacations, but never actually woke up early enough. Allie suspected Andrew had something planned, so it was an easy wake-up call (yeah, right)! He set up a GoPro to capture the big moment! Just as Andrew was about to propose, a nearby couple interrupted the moment for us to take their picture. After that interruption, Andrew set up the video again and got down on one knee!

Now they are SO excited to finally celebrate and tie the knot with Around Town Entertainment’s Altitude Band.

The beautiful couple got married at Edgewood Country Club in New Jersey. Allie and Andrew’s special day was hosted by the Edgewood Country Club with a gorgeous greenery backdrop! Before Allie started down the aisle, the pianist and violinist from Around Town Entertainment played “Con Te Partiro” as a beautiful duet! Everyone saw Andrew first see Allie start down the aisle, and everyone looked on with a smile. The two exchanged their vows and said their “I Do’s” and then skipped down the aisle singing along to the ever-fitting and celebratory song “This Will Be (An Everlasting Love” by Natalie Cole. It was such an exciting moment, almost as exciting as the party after!

Then it was cocktail hour, where the guests were seamlessly serenaded by the Around Town Band’s jazz trio featuring a bass, guitar, and piano! The trio perfectly underscored all the delicious hors d’oeuvre and bubbly drinks as the celebration kicked off. All the guests started to tap their toes along with many of the jazz classics the group played, getting excited to dance it out for the reception!

As everyone entered the reception room, the Altitude Band collaborated with the Around Town Entertainment’s Greek Ensemble which played a number of favorite and traditional dance songs to welcome the guests! The bridal party skipped into the room jamming it out to the most requested wedding band in New Jersey, the Altitude Band. Andrew and Allie had their first dance as husband and wife to “Thinking Out Loud” by Ed Sheeran and the dance party kicked off!

The Altitude Band played many of Andrew and Allie’s favorite songs throughout the night from artists such as Meghan Trainor, Maroon Five, Michael Buble, and Michael Jackson! It was truly a night to remember and we’re so happy to have been part of Andrew and Allie’s special day extra memorable!

Vows by the Sea