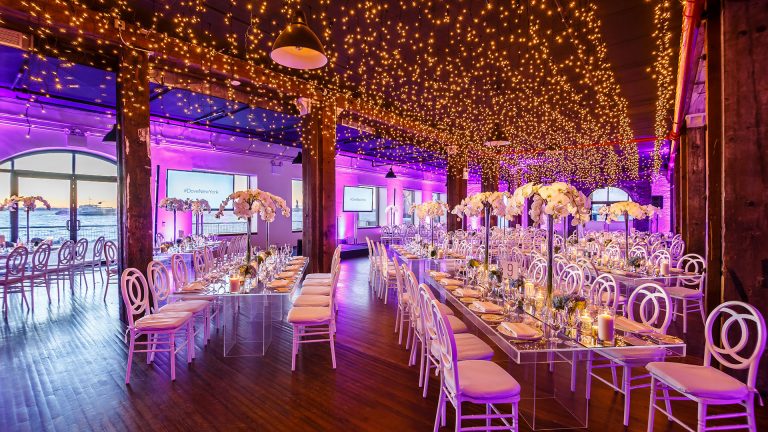 From The Classroom To The Altar

From the classroom to the altar, Danielle and Steven have truly been lifelong partners–even when they didn’t know it yet! After meeting in first grade, Danielle and Steven crossed paths several different times over the years–but it wasn’t until the stars aligned, and they began weekly commutes back and forth from NYC to Boston to see each other, that it became clear… they were truly meant to be! (It would seem that their wedding officiated by Courtney and Michelle, when they were kids, was foreshadowing in the making!)

For their celebration, Danielle and Steven invited us to join them at the Liberty Warehouse in Brooklyn! The Around Town Entertainment’s ceremony pianist played several heart-warming tunes, including “Make You Feel My Love”,  “Patience”, and “Praise You”. By the time that the final note was played, it was official–Danielle and Steven were married (for real this time)! From there, the group migrated to the Promenade, where it was time for cocktails! The trio all set the mood for the cocktail hour, where everyone got warmed up for the main event… the reception of course! With plenty of spirits consumed, and excitement sufficiently high, it was time to move on to the party!

When everyone had settled, Danielle and Steven were ready to make their mark–and entered to “Some Kind of Wonderful” and to uproarious applause! By the time that the sound finally died down, everyone was ready for the first dance, “In My Life.” It was their first official turn as husband and wife, and it was beautiful! After this, the party was ready for a bit of liveliness, and the entire band lead them in the Tarantella! Shortly thereafter, while everyone caught their breaths, it was time for the parent/child dances! Danielle and her father danced to “Wildflowers”, and Steven and his mother danced to “Simple Man!”

From there, the night spun into a celebration full of even more dancing and enjoyment! There were plenty of highlights, specifically those songs performed by our ATE singers! The fan favorites included “Everlong”, “Peg”, “Don’t Start Now”, and plenty more! As the night drew on, there was plenty more dancing to be had, and plenty more celebrations, too! Congratulations again to the happy couple–we were so honored to join! Cheers!

All I Want For Christmas Is… You, Me, and a Summer Wedding!

Everyday With You Is Vacation!