When the Proposal Doesn’t Go as Planned 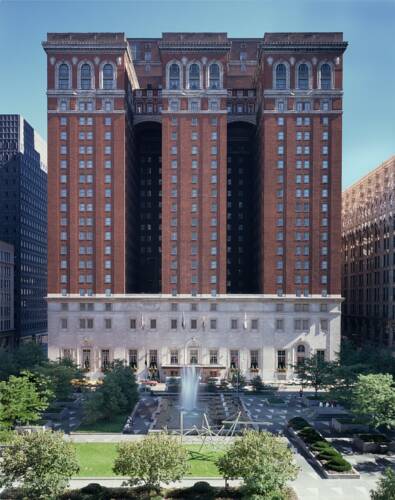 Edward’s plan was to propose to Hillary on top of the Omni William Hotel in Pennsylvania after a gorgeous dinner. It was a starlit night, the cool breeze felt beautiful until Edward got down on one knee. Hillary could tell that he had worked so hard, saving money for the ring. She really appreciated it! He ended up picking the most romantic engagement setting he could find.

When the time had come, Edward gazed into Hillary’s eyes, popped open the ring box and then… before he could say anything an older woman reeking of alcohol came out of nowhere, grabbing his shoulder and leaned into his face. “Is he PROPOSING???!!!!” she screamed.

Everyone on the roof stopped what they were doing and stared at them and the elderly drunk woman with pink hair. They both stood there mouth gaping and Edward said softly, “Well ma’am, I’m trying to.” Drunk lady’s husband came running across the roof, apologized profusely and led her away as she yelled, “They’re gonna get marrriiieeed,” to anyone that would listen. Edward shrugged, looked at Hillary and said, “Well?” Hillary said, “Ok.” And that’s how they got engaged!

Fast forward to their wedding on October 31, 2020 at Skytop Lodge in Skytop, Pennsylvania! The couple invited Around Town Entertainment to play on their special day. They chose the award-winning Altitude Band for the reception.

Skytop Lodge is one of the most coveted wedding destinations in the Northeast and the wedding band were honored to play in front of Edward and Hillary’s for their very special day! The ceremony took place at Skytop Lodge’s infamous Formal Garden. Over 100 friends and family took their seats as they waited patiently for the couple to walk down Skytop’s dramatic outdoor staircase. As the pianist from Around Town Entertainment performed “Samson” Regina Spektor, the bride headed towards the aisle in stunning fashion. When the bride finally kissed the groom, the wedding pianist played “Signed Sealed and Delivered” as the two walked off into the sunset.

The party continued in the Evergreen Ballroom Courtyard for cocktails and the reception. With soaring ceilings and magnificent crystal chandeliers flanked by a wall of French doors that lead out into the Evergreen Gardens, The Evergreen Ballroom was the perfect setting for an intimate wedding. A jazz trio from Around Town Entertainment delighted the crowd as they enjoyed fine cocktails and laughter. Then, it was time for Around Town Entertainment’s Altitude Band to take the stage.

The Altitude Band started with a very unique cover of “Masquerade” from Phantom as the bride and groom entered the building. The band created a very specific rhythm while also making it dramatic enough to be true to the song with bass sticks and drum patterns that made it a theater feel. Next, the wedding band played “Love that Girl” by Raphael Saadiq as the newlyweds made their first dance. Then, the father and daughter had their own duet to  “Tupelo Hone” Van Morrison. The mother and son had their dance to Nat King Cole “Ramblin Rose.” After dinner and cake, the dance floor was packed all night as the Altitude Band sang songs Four Tops, Perry Como, Rick James, and Halloween themed music to finish off a truly remarkable night!