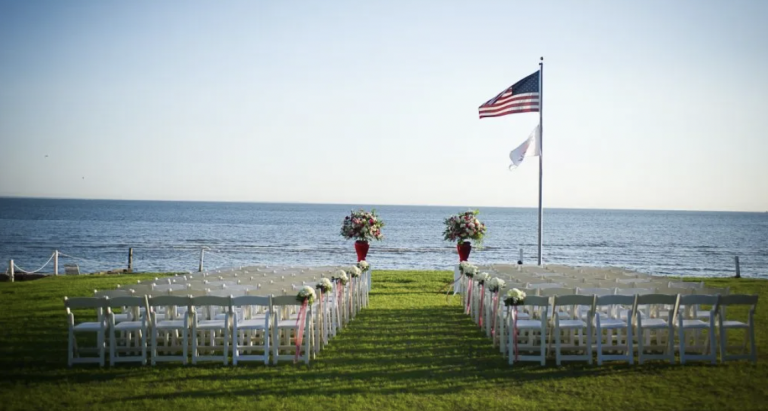 When Danny and Grace first met in college, they became fast friends–they bonded over their mutual love of dogs, (shout out to their own, Skylar!) traveling, and wine. But it wasn’t until they went to Boca’s Best Pizza for Valentine’s Day that they were officially inseparable forever–and that meant that they had plenty of pieces of pizza in their future–including one on their wedding day! And we got to tag along to celebrate!

With the beautiful waves just beyond the lawn, the Around Town Entertainment pianist got to serenade the attendants of the gorgeous ceremony. As Danny and Grace made it official, the pianist played some of the favorites, including “What a Wonderful World”, “Tiny Dancer“, and “Bittersweet Symphony”! By the time that they shared their first kiss as husband and wife, the final note was played–and that meant it was time to get the party started!

After a brief pivot to the Grand Ballroom Terrace, the jazz trio warmed up the party with some gentle tunes. While the attending celebrators mingled and drank, the night was just beginning–and it was a perfect transition into the beginning of the reception! Once the attendants took their seats, our band started the night off with a BANG–and the Around Town Band’s lead vocalist sang “Bang Bang” for the entrance of the bridal party! Shortly thereafter, it was time for the debut of the newlyweds, and the band blessed their entrance with her rendition of “As Long As You Love Me”!

As the cheers settled, Danny and Grace took the floor for their first dance, and were treated to one of their favorite song selections: “Dancing In the Moonlight”! The upbeat jam was a perfect jumping off point into the deep end of heartstring tugs, because it was then time for the parent/child dances! Grace and her father danced to “You Are The Sunshine of My Life” and Danny and his mother danced to “Landslide”! After shedding so many tears, the wedding party was due for a treat–so how about some cake? As the slices were dealt out, the Around Town Band made sure that everyone experienced an auditory feast as well, with “This Will Be (An Everlasting Love)”!

After everyone refueled their energy with some cake, they made their way to the dance floor to party! There was tons of favorites that night, but the band’s lead female vocalist definitely held the crown for most cheers with “…Baby One More Time” and “All I Want For Christmas Is You” (even if it was a bit early for the Christmas season)! With so many great songs, the night quickly slipped away, and before we knew it, it was done!

Everyday With You Is Vacation!